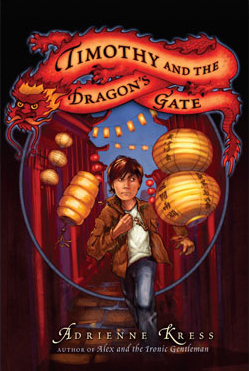 With a father who can’t control him and a mother who is always out of town, Timothy Freshwater has finally been expelled from the last school in the city . As if that were not enough, events conspire to ensnare him in an ancient quest.  When he meets Mr. Shen, a mysterious Chinese gentleman who is a mailroom clerk at his father’s office, Timothy finds himself deeply entrenched in a rescue operation centuries in the making.

It turns out that the diminutive, elegant Mr. Shen is a dragon, banished and forced to take human shape for a thousand years until he can resume his true form by scaling the Dragon’s Gate during a festival for the 125th year of the dragon. Until that time, he is sentenced to enslavement by the holder of the golden key. It is, of course, Timothy who finds himself the latest keeper of Mr. Shen. The boy too smart for his own good is reluctant to assume the task, but tackles the challenge, after being stalked by a stealthy ninja and chased by a menacing trio of black taxicabs.

When Mr. Shen falls into the wrong hands, Timothy is flailing in treacherous waters, literally. And then a strange-looking black brig with red sails, called, for some reason, the Ironic Gentleman appears on the horizon. Relying on his own ingenuity and an annoying new ally, a girl called Alex, Timothy must face up to his responsibilities and rescue the dragon from a fleet of Chinese pirate junks. Above all, he must have enough faith in himself to take on that fleet’s commander, the Man in the Beige Linen Suit.

Timothy and the Dragon’s Gate is an astounding tale of excitement and daring, told in Adrienne Kress’s now distinctive, sparkling prose, with a wry humor and a poignant sweetness. Beyond the spellbinding action, the story reveals a boy who uncovers his own ability to love, and opens his heart to the world around him.

Purchase Timothy and the Dragon's Gate: 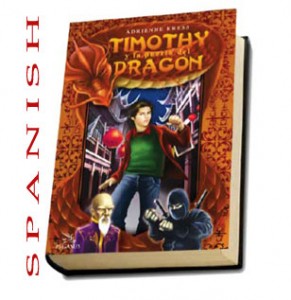 PRIASE FORTIMOTHY AND THE DRAGON'S GATE

“. . .Timothy and the Dragon’s Gate [is] the enthralling and impressive new novel from Toronto writer, actor, and teacher Adrienne Kress. Set in the same whimsical (and often surprisingly violent) universe as her debut, Alex and the Ironic Gentleman, Kress has crafted an engrossing tale laced subtly with its own set of valuable lessons – ones she is careful never to oversell. Timothy and the Dragon’s Gate might be about growth and selflessness and generosity, but kids don’t want to read that stuff: they want stories about pirates, ninjas, epic battles, sewer chases, and dragons, which Kress delivers in spades. . . Kress employs a deceptively casual tone, an ease that belies the complexity of her prose style. . . Timothy and the Dragon’s Gate is an old-fashioned tale, being told by a gifted storyteller, to an audience of one.” - Robert J. Wiersema, Quill and Quire, starred review

“Action-packed and full of reader-directed asides, Kress's sophomore novel follows in the footsteps of its predecessor, Alex and the Ironic Gentleman . . . Brief chapters keep the story moving, and Timothy's general surliness and sardonic observations, particularly in contrast with Mr. Shen's courteousness and Alex's daring, make for plenty of comic moments. . . A spirited follow-up.” – Publishers Weekly

"Kress has done a marvelous job parodying the towering egos of the adult world . . . [and] avoids the major pitfall of writing for young audiences: heavy-handedness. Timothy's character revelations feel like short, meaningful epiphanies and not moral sermons. . .” - Kelly McManus, The Globe and Mail

"Kress has the knack of writing child characters who could be my next-door neighbors . . . Like Alex and the Ironic Gentleman, Timothy and the Dragon's Gate charmed me into staying up way too late to finish it. No syrup here. Instead, there's adventure, derring-do, attitude, and danger. All wrapped up in a clever and fascinating take on the reluctant hero, courage, loyalty, and—of course—dragons." - Alice Loweecey, Buddyhollywood.com

“With solid characters, quirky humour, and an intelligent plot, young adults who enjoy fantasy should be captivated by this story. . .” – Joey A. Kane, Foreward Magazine

"An exciting read that's action-packed from cover to cover." - KH, The Magazine 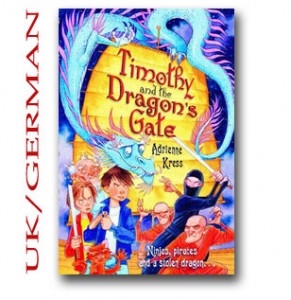 What the kids are saying:

“I just Finished Your Book it was GREAT! I thought that it was cool that you had Alex in the book as well i was so excited when she got involved! Are you making a new books!? I am so ready for the next! How do you come up these good Ideas!?  I loved all the new Characters I loved Timothy’s personality in the book!” – Marley, 13

“i am one of your biggest fans i love your books . . . timothy and the dragon’s gate is amazing.” -  Matthew