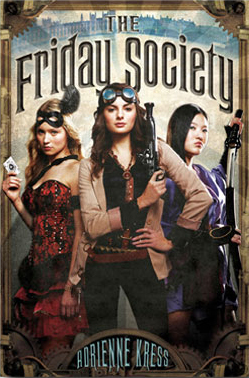 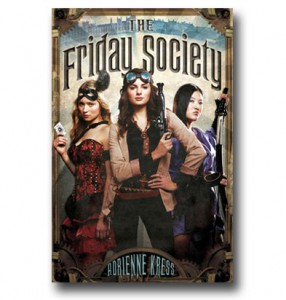 Set in London at the turn of the last century, the novel follows the stories of three intelligent and very talented young women, all of whom are assistants to very powerful men: Cora, lab assistant to a member of parliament; Michiko, Japanese fight assistant to a martial arts guru; and Nellie, a magician's assistant. The three young women's lives become inexorably intertwined after a chance meeting at a ball that ends with the discovery of a murdered mystery man.

It's up to these three, in their own charming but bold way, to solve the murder -- and the crimes they believe may be connected to it -- without calling too much attention to themselves.

THE FRIDAY SOCIETY got a starred review from Quill & Quire!

Find The Friday Society on Goodreads

"This book is pure fun and adventure, and the author’s casual, irreverent sense of humour is apparent on every page." - Quill and Quire, starred review

“It's hard not to love a book that begins with the sentence, "And then there was an explosion." It's also hard not to love a young-adult-girl-power-steampunk-romp that doesn't take itself too seriously. . . The girls are complex and serious characters, but much of the plot is willing to poke fun at the tropes of steampunk, convoluted plots of supervillains, and mad scientists. . . [a] zany steampunk YA.” – io9.com

“There’s some real drama to the book . . . but an overall sense of frothy fun prevails, bolstered by winks at genre convention and by three kick-ass females with complementary strengths and distinctive personalities.” – The Horn Book

“This well-written book will appeal to fans of science fiction as well as detective stories. . . The story is especially effective with its accurate pacing; the story unfolds so smoothly that at the climax readers will be surprised at how efficiently the plot expanded into an intriguing web of power struggles and menacing evil-doers. . . teens will enjoy this eccentric London murder mystery” - Christina Fairman, VOYA

"The Friday Society is earnestly, refreshingly different." - The Book Smugglers

“Kress has a knack for characterization and culture-building. Reading The Friday Society, one can tell that she's an imaginative author who has taken the time to immerse herself in the culture of steampunk, but she presents it in a way that is fun and accessible. Kress' flavor of steampunk is vivid, lively, and fantastical—she doesn't try to emulate Victorian-style prose. She has created something very much her own.” – Indigo Teen Blog

“Humour, mystery, action, strong female heroes, weird and wonderful contraptions, and the promise of romance - The Friday Society has all the right components for a highly-effective and sure-to-trend debut of a series.” –CanLitForLittleCanadians

“The worst thing about The Friday Society is that it ends.  I'm not criticizing the ending; I'm just saying that I had so much fun reading this book that I felt considerably depressed when it was over.  It's that good.” – CarrieS, Smart Bitches Trashy Books

"Starting with stock characters provides shorthand for readers to sketch out expected characteristics…and it also allows authors to subvert expectations. In her steampunk mystery, Kress introduces readers to the kind of trio you might have seen before: the tomboy, the blonde bombshell, and the silent and deadly killing machine. But by starting with familiar (and overused) tropes, Kress gets to dig beneath the surface and take each of these archetypes to emotional places they’ve never been before: vulnerability, mockery, and ultimately catharsis." - 7 Awesome YA's That Defy The Tropes, Barnes and Noble

"An explosively entertaining concoction--a mystery and an adventure folded around complex themes, draped in rich historical settings, spiced with Steampunk cool and laced with sharp contemporary wit. It's a firecracker of a read, packed with a trio of feisty, fiery, fiercely intelligent heroines worth rooting for."
- Lesley Livingston, author of the internationally bestselling Wondrous Strange series

“THE FRIDAY SOCIETY is what I’ve been waiting for, a dashing adventure bursting with atmosphere and originality, where the day shall be saved by women of brilliance and character. Keep writing, Kress! I must have more! Most highly recommended.”
- Julie E. Czerneda, author of A TURN OF LIGHT

One of the top five Steampunk books of 2012

A collection of some blog reviews from around the net: