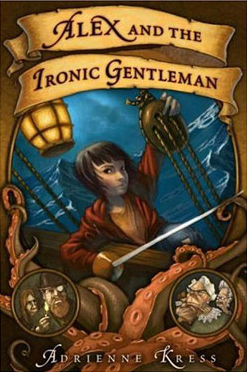 The starred review in Publishers Weekly praised Alex & the Ironic Gentleman as “a wonderful blend of whimsy and moral” and at the heart of this story is Alex Morningside, a lovable tomboy with a knack for trouble and a quest for adventure.

Often mistaken for a boy because of her haircut and name, Alex Morningside is an inquisitive ten-and-a-half-year-old who attends the prestigious Wigpowder-Steele Academy. Unfortunately, though she loves to learn, Alex just can’t bring herself to enjoy her classes. Her teachers are all old and smelly and don’t seem to know about anything that has happened in the world in the last thirty years, and her peers…well they are quite simply ridiculous.

Luckily for Alex, the new school year brings an exciting new teacher. Mr. Underwood makes lessons fun and teaches her how to fence. But Mr. Underwood has a mysterious family secret—the swashbuckling and buried treasure kind—and not everyone is glad he has come to Wigpowder-Steele. When the infamous pirates of ship called the Ironic Gentleman kidnap Mr. Underwood, Alex sets off on a journey to rescue him, along the way encountering a cast of strange and magical characters, including the dashing and sometimes heroic Captain Magnanimous, Coriander the Conjurer, the Extremely Ginormous Octopus, and the wicked Daughters of the Founding Fathers’ Preservation Society.

Page-turning, hilarious, and ultimately tender, Alex and the Ironic Gentleman ends with a surprise twist that will have readers eagerly awaiting the next book in this delightful new children’s series.

Purchase Alex and the Ironic Gentleman:

PRAISE FOR ALEX AND THE IRONIC GENTLEMAN

“I read Alex and the Ironic Gentleman, and to be honest it had me at the title. A clever title to live up to and the story did not disappoint. I found it quirky, hilarious and genuinely exhilarating. There was a nod to Lewis Carroll and a wink to Charles Dickens, but no more than that, Adrienne's words are packed with originality. Alex is a wonderful hero who deserves to return for further adventures, indeed I suspect there will be a riot if she does not. Great plot, larger than life characters. The future is bright.” – Eoin Colfer, author of the bestselling Artemis Fowl series 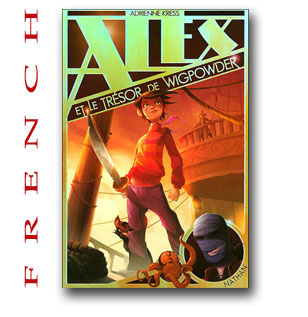 Named one of the best reads for 2007 by The Magazine

Alex was featured on the CBS Early Show as “one of the books for children you should know about.”

Adrienne was featured in the New York Post's “Post Potter Picks” column as one of six authors who have a chance to fill the void left by J.K. Rowling - The New York Post

Alex garnered an honourable mention as an Ontario Library Association’s Best Bet of 2007.

“Kress's debut is a wonderful blend of whimsy and moral, with winks at the reader on every page.  Alex, who lives with her uncle in the flat above their doorknob shop, is dreading the sixth grade and the stern teacher who comes with it, but on the first day she learns that a new teacher has been installed – the young Mr. Underwood ("a marvelous teacher despite being ever so distinctly odd"). He turns out to be a descendant of a famous pirate, and soon three vicious men turn up in town, looking for a map to a fabled family treasure. The map is somewhere in a stately manor house run by the vicious old ladies of the Daughters of the Founding Fathers' Preservation Society; Alex finds the map and escapes, but returns home to find that her uncle has been killed and Mr. Underwood has been kidnapped by the pirates of the ship, Ironic Gentleman. She sets off to find him and has some odd encounters along the way (at one point, she meets an enormous octopus, distraught over how computer animation has wrecked his movie career). Eventually, Alex ends up on the Ironic Gentleman, face-to-face with the dreaded Captain Steele the Inevitable, whose identity comes as a big surprise. Kress has a delightfully simple, observational prose style that recalls A.A. Milne, right down to the frequent capitalization of Good Things and Very Interesting Things and so on. This inspired book should hold up to many re-readings.” - Publishers Weekly, starred review 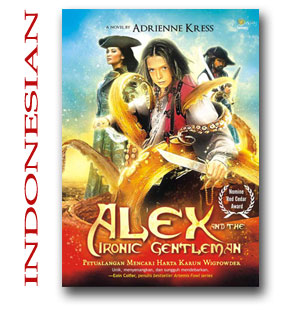 “Looking for a story with an edgy style and a smart girl? This tale tumbles across the map, a treasure map, from a 6th-grade classroom to a remote island, enjoying outrageously named characters and wild episodes. Fun and fast.” - Mary Harris Russell, Chicago Tribune

"This is a swashbuckling tale of adventure and loyalty in the tradition of The Princess Bride and Harry Potter." - Michelle Branch, Editor Smartgirl.org

“The novel's episodic plot and rapidly shifting settings help keep interest high, as readers never know what new surprises are around the next corner . . . Alex is a plucky, matter-of-fact heroine whom audiences will be rooting for until the very last page.”  - Norah Piehl,  Kidsreads.com

“[Alex] is a swash-buckling tale that is fun, thrilling and, at times, ridiculous. . . It has the potential to become a well-loved series. Alex is a character I want to see again and again.” - Rachel Cornelius, Wassau Daily Herald

“With Alex and the Ironic Gentleman, first-time novelist, Adrienne Kress, gives readers a fresh, action-packed and hilarious adventure that is also oftentimes thought provoking and mind-bending . . . it is a book, the pages of which are to be rationed; a story that is a surefire cure for anyone’s foul mood. Indeed, with Alex and the Ironic Gentleman, Kress has created something shining and bright; something philosophically sound, with pages that oft compel one to put the book down for further pondering. With Alex and her world, Kress has created a story that not only children will enjoy, but also one of those rare stories that, undoubtedly, will touch the child that still lives inside us all.” - Caitlin Berry, Canadian Materials Magazine 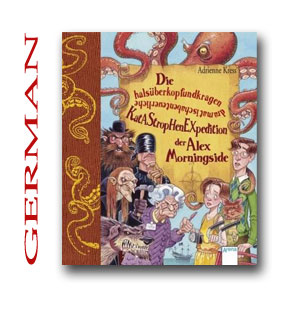 “A real page turner with laughs and amusing asides throughout. . .” - Writeaway.org.uk

“This is a highly entertaining story full of excitement and zany characters. It is fast paced, funny and delights in the richness of the English language, with a style reminiscent of the Lemony Snicket series.  A thoroughly enjoyable and satisfying read.” - BookTrust

“In this post-Harry Potter era, many authors are riding the considerable momentum built by J.K. Rowling as they pump out one fantasy series after another. Among the many mediocre copycat efforts there are still a few treasures to be found, and Alex and the Ironic Gentleman is one of them.” - Sasha Roeder Mah, Edmonton Journal

“I loved this book. It is a romp from start to finish - clever and quick and amusing . . . I applaud almost any story with a girl protagonist that I can imagine boys reading without any grousing. Adrienne Kress knows how to put a story together. I enjoyed the cast of quirky secondary characters immensely.” – Kerry Millar, Shelf Elf

“Not much makes me feel like a kid again. Alex and the Ironic Gentleman did it by page five. Like one of those old movie trailers, I laughed, I cried, I wanted more.” – staff,Buddy Hollywood

“It is charming and funny, with the touch of a moral tale as the heroine learns how to cope in the face of adversity. Most of all, though, Alex and the Ironic Gentleman is a fabulous read.” – Sophie O’Reilly, Professionally Speaking

“Alex and the Ironic Gentleman made me see that a good story isn’t complete without pirates. . .” – Shaina Marie Cruz, Bellflower Bulletin

What the kids are saying:

“Alex and the Ironic Gentleman was the most fantastic thing I've read in a long, long time. Thank you for putting it out there! I intend to make it known to any friend, family, or person with the ability to read in general.” -  Mike, age 13

“I recently read Alex and the Ironic Gentleman, and I loved it!! It is an excellent book, and I enjoy reading your writing a lot! . . . You included some really interesting things in your descriptions, which sometimes made me laugh. . . I can't wait to read more of your writing; your work is excellent!” – Kimberly, age 12 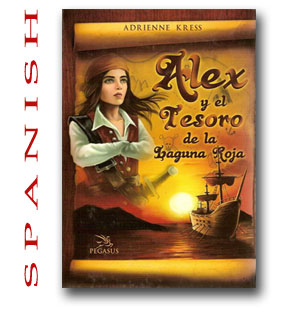 “My brother bought Alex and the Ironic Gentleman for me as a present, and I really liked it. I'm doing a book jacket on it for a project in 7th grade language arts. I've read some of your blogs and you seem really funny. I like how you wrote that you wear weird colored socks.” – Sarah, 12